A bit of musical psychology from Austin City Limits

Right, so Austin City Limits is one of the big music events across the globe and big festivals are a great place for hearing different sounds and musical styles back to back, side by side. 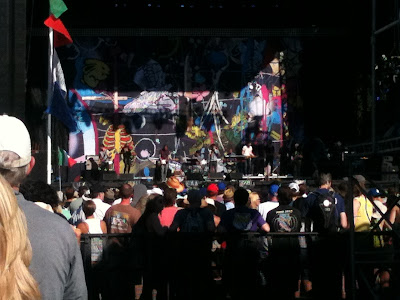 A couple of years back I was there at ACL and made a few observations re the differences between live and synthesised sound.  Even in this age of fantastic digital modelling synthesised music still lacks the spikes and variations that occur in analogue sounds.

Now, not everybody hears things the same way, each of us are different depending on what we've listened to before, our age and previous listening experience; plus any musical instruments we may play etc., myself included, so these are completely my observations, not anyone else's. You might hear things differently? 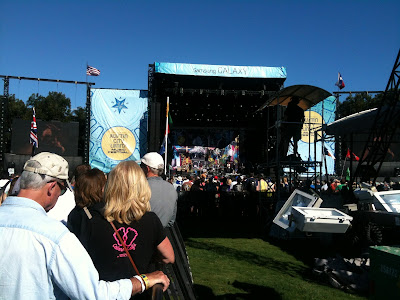 At ACL there were some really great acts, tight arrangements, fine playing and generally just blistering stuff! On the other hand there were some that, while good (for me at least) were missing something. In most cases they were really well polished sets of music, so what makes the difference; my personal taste? Perhaps but I think there is a musical dynamics and communication thing going on that makes all the difference.

So, who'd I see? (In no particular order)

Synth based pop and rock tends to have one dynamic. Even in this age of amazing digital modelling it still sounds like music with none of the spikes and variations that occur in analogue sounds. Even when mixed with live instruments the sound dynamic is flatter.  Much synth based music today sounds very similar to the stuff created in the late 70s early 80s, when synth and sequencer based records were just beginning to take off. 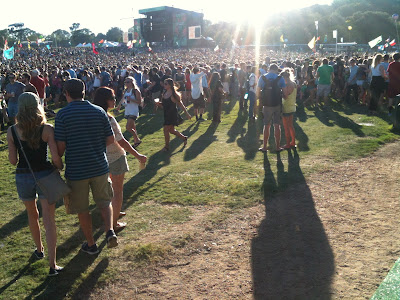 Because synth based sound is created in layers, variation is mostly created by dropping out a track, such as taking the kick drum beat and bass out for a few bars before it re-enters. Sometimes this will happen as a pre-chorus section, or bridge back to where it's been, or signalling a new section of music. As it's dance oriented music it's always going to be set at a pace of about 120bpm, which doesn't help with that flat, undynamic sound.

On a macro level artist involvement with the crowd, their sense of enjoyment about what they are doing, and how well that comes across all factor in the communication thing between artists and their audience, regardless of whether they're big names or smaller acts.

Watching a guy sat behind a set of decks with his cans on, head down, knob twiddling isn't a great communication experience. At night this can be spiced up with a great light show, but an interesting thing happens when this occurs, people stop looking at the stage lights and start looking at/dancing with each other, it becomes in effect a disco.. This was exactly what happened with Calvin Harris's 'singing DJ' set.

Does synth based music help or hinder the communication process? While the beat and overall sound levels can be changed, it definitely lacks the subtleties and changing dynamics that live analogue sound, that gives clues to the live musical interaction happening between the musicians.

For me, synth based music, and particularly dance music, tends to lack the individuality of acoustic based instrumentation (amplified or not) and ends up sounding prefabricated and formulaic by comparison, and set amongst music that really is live and interactive it really does sound different, and sadly somewhat lifeless... But that's just my opinion....! What do you think?