Just been trying out a new Blackstar HT 20 Studio amp. It has two channels both with really good quality sounds, ranging from classy 'chimey' tones on the clean channel through to bluesy Larry Carlton/Robben Ford type of tone when it's slightly over driven (both channels), right on to high gain rock/metal tone on the overdrive channel, but with picking articulation always clear. Plus it all cleans up pretty well when the guitar volume is rolled back even on the most overdriven sound (always a pleasing factor on guitar amps!) 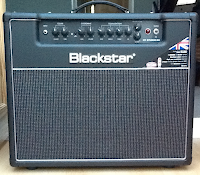 Interestingly the clean channel has just a single tone control to brighten/darken the sound, but it's never harsh or muddy, giving a full sparkly jangle right through to a cool jazz tone. In common with many valve amps the other factor controlling the tone is how high the master volume is set, the higher settings giving the tone more sparkle and definition.

The overdrive channel has the usual treble, middle, bass controls and an Infinite Shape Feature (ISF) control which seems to appear on all the Blackstar amps. This control works with the mid range and essentially darkens and lightens the sound. It's fairly subtle with the mid control set at halfway, but switch the middle all the way off to see how it really influences the sound.

For starters try setting all the tone controls at 12.00 o'clock with the master volume low and work from there, just adding and reducing whatever you need to tweak.

For the Larry Carlton / Robben Ford 'Dumble amp' type of sound you'll need to turn up the mid and treble to about 6-7 and back off the bass to about 3-4; set the Infinite Shape Feature (ISF) control to about 3-4 and volume at a similar level. Using a Gibson 335 type guitar helps a lot if you are trying to get close to Larry Carlton's signature sound too...! I use a Godin Flat Five X for this kind of stuff and this also seems to work very well. For a Robben Ford type sound, use a single coil pickup guitar (Strat/Tele type instrument); I use a Godin Artisan TC2 with single coil replacement pickups. You may also need to darken the sound using the ISF control.

I haven't gigged with it yet but it'll be interesting to see how it goes! In the meantime I'll try and get some sample sounds/videos up for a listen. Keep it steady!